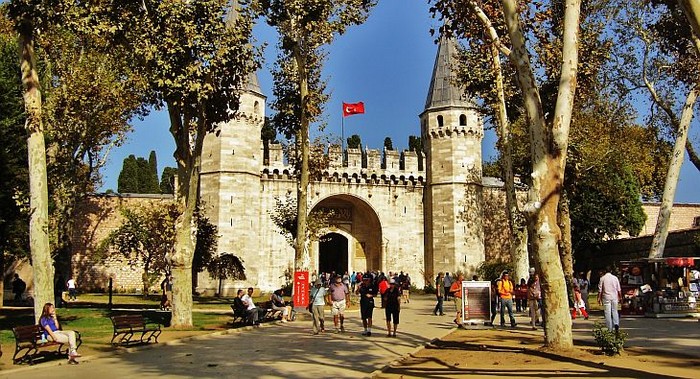 1. Day : Arrival
Upon your arrival we will pick you up from the airport and transfer to Hotel in Sultanahmet area. Overnight in Istanbul

2. Day : Istanbul Full Day City Tour Full Day (B,L)
We begin our tour of the Sultanahmet district, the heart of old Istanbul, at Hagia Sophia. Built by the Emperor Justinian in the early 6th century AD and designed by Anthemius of Tralles and Isodore of Miletus, the church is one of the marvels of world architecture. Converted into a mosque in 1453, it is now a museum. Its massive dome still dominates the skyline of old Istanbul. It is also famed for its mosaics, including glittering portraits of emperors and empresses and a poignant Virgin and Child.

Next we visit the Blue Mosque which takes its name from the exquisite tiles adorning its interior. Built by Sultan Ahmet I in the early 17th century and designed by a pupil of Sinan, the greatest of Ottoman architects, it is the only imperial mosque with six minarets. Its courtyard is especially grand. The Hippodrome, the stadium of ancient Byzantium, held 100,000 spectators and featured objects from all corners of the empire. Of these, an Egyptian obelisk and a bronze sculpture of three entwined serpents from Delphi survive. The Grand Bazaar was the commercial heart of the old city and its 4,000 shops are full of treasures including carpets and kilims, silks, jewelry, ceramics, icons, and leather goods. Wandering through the Grand Bazaar, indulge in some shopping, Ottoman style.

Topkapı Palace, which, from the 15th to the 19th century, was the principal residence of the Ottoman Sultans. We will visit the fabulous Imperial Treasury and the Baghdad Kiosk. Topkapı Palace is now a museum and has unrivalled collections of jewelry, including the Spoonmaker’s Diamond, the 3rd largest in the world. It also possesses numerous Ottoman court costumes and ceramics, notably including one of the world’s finest collections of Chinese celadon ceramics, many of which were gifts from other rulers. Interestingly, some of the ceramics have a special glaze that was said to change color in the presence of poison.

We also visit the Imperial Armory, displaying centuries of Ottoman weaponry. But perhaps the loveliest feature of Topkapı Palace are its courtyards with their ancient trees; it is easy to imagine the sultan strolling here far from the cares of state and empire. Overnight in Istanbul

3. Day : Princess Island Tour Full Day (B,L)
There is no better way to escape the bustle of Istanbul for a day than with a visit to the idyllic Princes’ Islands. Enjoy cool breezes and charming sights along the way to Büyükada, the largest Island in the chain. Famous for their mild climates, lush vegetation, and ornate Ottoman houses, all the islands are unspoiled by traffic. Instead of cars there are carriages, called phaetons, which we will use to tour the island and its beautiful scenery studded with elegant mansions draped with purple bougainvillea, reminiscent of a more leisured and graceful era. We will enjoy our lunch at the best of one of the many excellent fresh fish restaurants that line the waterfront, gazing across the Asian shore of Istanbul, so close – though it feels worlds away. Overnight in Istanbul

4. Day : Bosphorus Cruise and Spice Bazaar Half Day (B)
>Half-Day Morning Tour
Golden Horn (from the bus), the arm of the Bosphorus and a natural harbour of the historical peninsula separating the old and the new parts of İstanbul where the first colonies settled during the Byzantines.

Bosphorus Cruise through the waterway separating the two continents, Europe and Asia, with a possibility to take photographs of marble palaces, ancient wooden villas of Ottoman architecture besides modern residentials and luxurious apartments. Rumeli Fortress (from the boat – no interior visit), historical armament built by the Conqueror to control and protect the Bosphorus. A unique example of military architecture. After the tour you can discover Taksim Square.
THIS TOUR TERMINATES AT TAKSİM SQUARE Overnight in Istanbul

5. Day : Departure
Checkout and we will transfer you to Istanbul international airport according to your flight schedule. Goodbye!

This package is just an example.

Why we prefer to quote upon your request and not have fix rates for packages?

Therefore, we prefer to offer a Taylor made package for your clients to effect satisfied clients.

Just advise us the needed information below and within few hours you will get from us the best offer.

Please query with the needed information for rates on tours@golfintravel.com. For instant questions whatsapp us on +905413812223